Coffee with Mr K in the crisp air after yesterday’s typhoon, and the light slants into the flat shopfronts over the road. K grew up here in Honjo in the postwar. He used to go behind those buildings to where there is now that modern apartment block, to the Kabaya sweets factory where you could exchange coupons from the packages for lucky toys.

One of the shopfronts, he says, used to belong to a manufacturer of soba noodle-making machines. In those days soba was a cheap food, cheaper than rice, or wheat udon noodles, because it can grow in land that is barren – the word he uses is thin, scrawny. He tells you about timber and mortar construction and says, Then the buildings are finished with kessho, makeup, they’re coated with tiny pebbles. 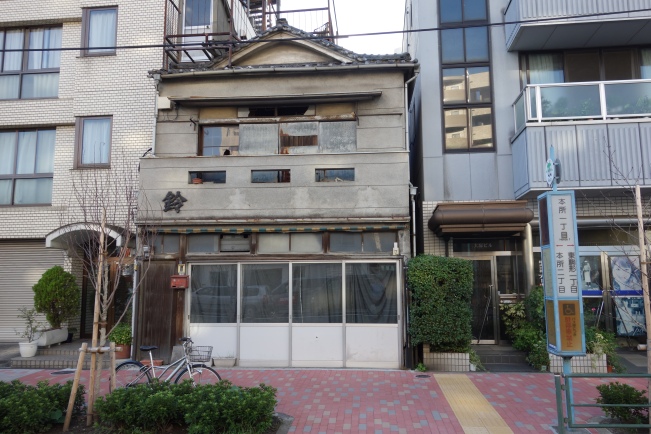 You get up from your chair and walk away a little to take a picture and he comes with you and shows you the walls of the place next door, which is also finished in little grey pebbles. What draws your attention, though, is the single carved kanji character on the left above the door. You’ve been noticing many old buildings with these characters. They are hand-carved. They’re not plastic.

The kanji says Suzu, or Bell. K says, This used to be a tatami maker. You ask if he knows it from his childhood. He says, No, I know because it says so, and points to the faded imprint of the three missing characters. He says, It was Suzuki Tatami Shop, 鈴木畳店 or I can’t quite make out that second one, Suzumoto Tatami Shop 鈴本畳店. And then you see what you had completely missed, the characters for ki (or moto), and the others, tatami, and shop. You feel a bit like that detective in the movie when everyone else has failed to spot the vital evidence, he discovers in a notepad the phone number or rendezvous address indented through the now-torn off page. They would have been quite wealthy too, K says, pointing to the gable at the top. Everyone needed tatami then.

The discovery refreshes your eyesight and you look around for more hidden history, and there is indeed another building down by the intersection with a palimpsest name, but it’s a long way off, and it looks like the letters are long gone too.