Fukuchan was a special find, a sort of jewel. For years you came off the Ginza Line from a different exit, with barely a thought to the station itself, then one day your friend takes you out the gate marked Matsuya-and-Sumida-Park, into the mouth of this brown, short, low-ceilinged corridor, tangled with pipes and electrical ducting, dim little restaurant bars, a 700-yen barbershop, fortune tellers, a cheap video store, some leaking plumbing, all but forgotten, but not at all forgotten, because look, it is here.

Those few minutes make your arrival complete, that weekend afternoon when your friend says, Come, let’s stop for a breather before hitting the streets. Orders some drinks and tofu and gyoza dumplings. Right off the train. You sit in Fukuchan, but because of its design – it has no door (no walls!) – you are both inside and outside, anonymous in plain sight. Small waves of people wash past, like your pre-Fukuchan self, with barely a thought to the station itself, they are nowhere and everywhere, in flux, molten, going away, coming forward, like in an airport – or a railway station!  Hahaha. It’s sort of nice they don’t see you.

But because of its design – it has no door – you are both inside and outside, anonymous in plain sight.

Fukuchan opened in 1964. You can almost picture the Olympic year bustle. Trading hours began with the first train, 6am. Fried noodles and shochu at dawn. These days they start around 11. They close at 8 or 9. Mondays off. You can feel friendliness in the name, the master’s family is called Fukutsuka. So Fukuchan’s the nickname – that’s Fukutsuka shortened, and given the diminutive for kids (or just chummy mates), as in, Hey Fuku-chan, come play!

The younger Hiroshi Fukutsuka, now 48, was called Fuku-chan too. Hiroshi says, Sure we used to play around here. Not right here exactly, you’d get yelled at mucking around in this arcade, but I’d come and get money off the old man and we’d go about, we used to live around the corner in those days, and you know the amusement park Hanayashiki, it used to be free to get in. Hiroshi says the old man still keeps his hand in, but it’s him who runs the place. It could be a good business if I did it all myself he says, but I employ people so it’s not really.

The menu has changed a bit, says Hiroshi, since his old man’s days. They have nikomi stews now, of suji beef tendons or motsu intestines. The flavour is rounded and soft. It’s honest, not greasy. The men who serve it look tough, but the taste is like your mum would make, if she made guts and tendon stew. 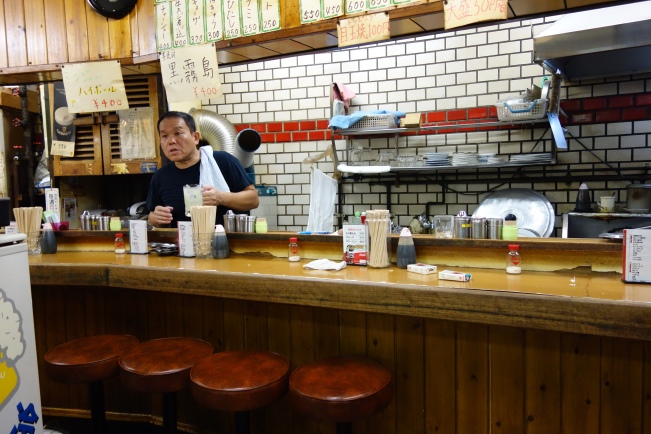 You hope Fukuchan survives the next Olympics and the civic drive to prettify. Hiroshi says they’ll be okay. The council tells us to change things, he says. And we might have to help make the station barrier free. But it would be hard to shut us down, there are so many different owners in this arcade.

The address, Asakusa Chika Shotengai, underground mall, is a B-grade celebrity itself. It inspires film shoots and manga, as pictured below, the story Drinks at Noon by Mesanta Uono in the Omoide Shokudo collection.

And at any time you could meet an unsung star. You’re eating yaki-soba noodles when hello!, here is Yuki in a bandana. It’s Sunday afternoon and she’s been to Ueno to see nihonga painter Seiho Takeuchi, very famous for his cats, and to a museum of downtown history in Fukagawa. I’m 61 and I dance flamenco, she says by way of introduction. I started two years ago. I also started calligraphy two years ago. You ask, Was there something about two years ago? Maybe, she says. Like being 59. And feeling, now is the time.

She says it’s her second visit here. But she could easily be a regular. That’s how things are at Fukuchan. 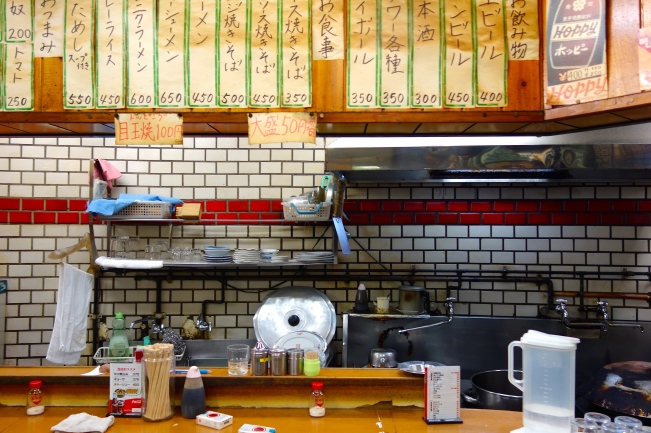 One Response to Hidden in View