Coffee calls so you leave the bazaar, fueled by the church’s yakitori, bike tyres going kerr kerr kerr on the asphalt, and now you’re around the corner at Nui, where there’s a bit more than coffee, it’s buzzing, another surprise happening – and here you were, just out for a neighbourhood stroll.

Curry Stand Vol. 2 is by two groups of enthusiast chefs: Shiina and Rie from Spoonful,  and Ken and Shintaro, the salarymen-by-weekday duo who transmute into the Tokyo Masala Boys, the self-described “weekend curry unit”. It’s a bit like you’re talking about bands. Maybe some wholesome kind of multilayered electronica. 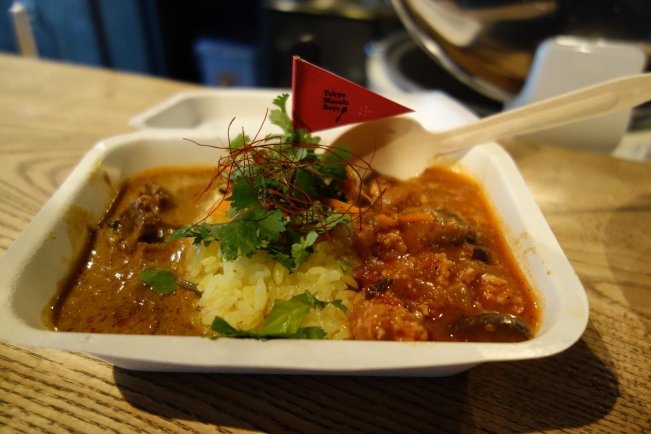 You pay up front at Nui’s big wooden counter and choose one dish from each of the boys’ and girls’ menu of two curries. It’s hard to decide. Pork and cabbage could be interesting, and there’s a tasty looking vegetable. You go for the eggplant and shimeji-mushroom keema by Spoonful and the mutton by Tokyo Masala Boys. Wow, mutton actually does taste like lamb – unusual these days. They’re both rich and warming, generous with ingredients, and give the feeling the cooks are less about making money than making good curry. The flavour is deep, as if it’s made from the ground up – and indeed, the spices are ground from the ground up, which Shintaro describes with a little pestling motion with his hand, and says, We make it from zero.

Shintaro describes it with a little pestling motion with his hand and says, We make it from zero.

You watch for a while, a lot of effort goes into this. Today is their second time at Nui, though Spoonful hosts a weekly curry night in Shinjuku’s Golden Gai and the Tokyo Masala Boys run a monthly curry event in Asakusa. Spice is nice.