Your Health is Number One

Near the corner of Senzoku and Kototoi you come across furniture shop Eishu Koeki-sha, with its glass owls, crystal balls, samurai armour, wooden carved gods, scroll paintings and a moon-shaped shelf, which you end up buying, because shopowner Junko Tsukiyama is a sharp saleswoman and tells you since it is a bit scuffed, as she has always put it outside on display, she’ll give it to you cheap, and you’re just in the mood to be persuaded you need a one-metre diameter Chinese-style moon shelf, carved from zelkova.

She is a good saleswoman because it’s all she does, and every now and then you pop in to see her, as you know she will be there, in the cockpit seat between the cabinets, with the view of the doorway, and the TV and the kero heater on top of which she cooks things.

She is 85 years old. Her husband, whose father sold old things and furniture, passed on seven years ago. Her son lives nearby. She still shifts furniture by herself around the store. She says, I’ve never had hobbies or done any exercise. I never needed them. I like looking after the shop, talking to people who come in, and selling things, it’s enough for me. Of course it’s nice when people buy something.

I’ll tell you what, you shouldn’t get into furniture or clothes if you want your business to run for generations. You should get into food.

She says, I’ll tell you what, you shouldn’t get into furniture or clothes if you want your business to run for generations. You should get into food, like those daigaku imo sweet potato fellows around the corner, or a coffee shop, or a bakery. My business is the hardest, because these things come and go with fashion.

She moved here about 40 years ago from Ishinomaki in Miyagi Prefecture. The countryside is so nice, she says. People are good. But, you say, you may not have survived the tsunami. Yes I know, she says. And anyway I don’t know anyone there anymore. But you know, we should have moved closer to Asakusa, to a brighter area, such as Nakamise. Yes I know it’s expensive there. But there’s no life around here anymore, the street is all shuttered up.

Have some mochi rice cake, she says. It only takes a minute, the kero heater is brilliant for cooking. Look, you just wrap some in foil and it cooks in a minute. I like mine plain with coffee, I know that sounds strange and you might like some soy sauce with yours.

Did you know 7-Eleven make the best sort of convenience food? One of my customers told me and you know, I think it’s better than you can make yourself. Actually I don’t like sashimi or anything raw very much, I always eat meat. I don’t have any pains in particular, I move up and down the stairs, no trouble.

Indeed it’s true you know, your health is number one. 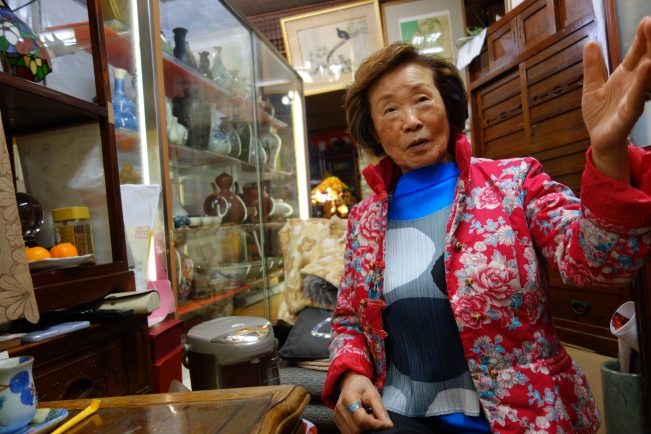 Well, right now I do have a little trouble moving, I crashed my bicycle the other night. It was a shock I tell you. I have never had a bicycle crash before in my life. But, bang, over I went. I didn’t hit anything. It was at night and I was riding quite far, to see my daughter. Gee! I went to the hospital and they said nothing was broken and I should just take it easy. But I have to say, I’ve never crashed before. Phew! Bicycles are scary.

What’s that you say, you’re interested in these little tables? You say they seem expensive? Ha, I’ll give you a discount, but it’s real wood cut from a real tree you know, it’s not manufactured. They’re very nice, you’ll like them. 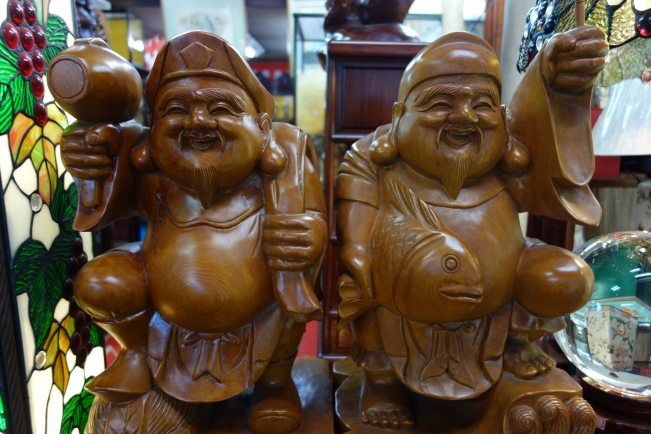 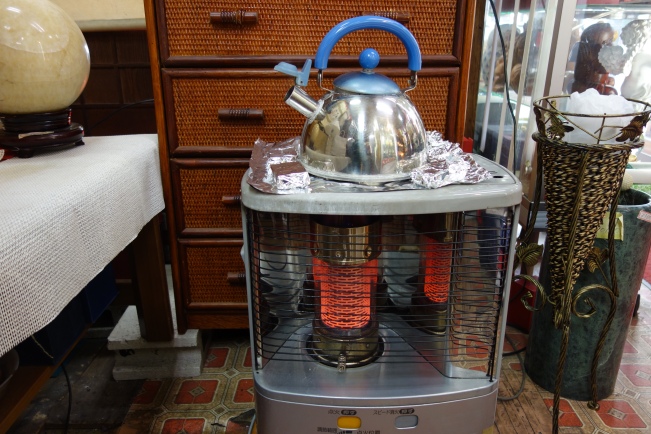