If you think it’s a kaleidoscope of knicknacks now, Variety Drugs Shoji at Asakusa View Hotel was apparently even more of a cornucopia in its old location up the back of the building some 17 years ago, stocked with gold-painted screens and other furniture, Venetian glass, all sorts of fancy stuff whose fashion faded after the economic shock. Now the shop is more like something you’ll find on nakamise – the open arcade of stores leading up to the temple – a homey look, a random cascading warmth, an overgrown corner of this otherwise staid hotel lobby. 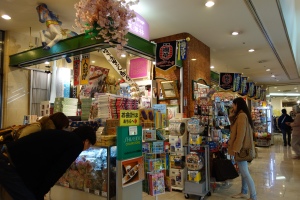 Shop president Ryo Shoji and his wife Hideko (who is camera-shy), tend the display like a garden. Hideko started here 28 years ago, just after the hotel opened. She says, It’s a toy box! The more you look, the more you find! You suspect even she may not know all the stuff she’s got, around the Marilyn Monroe statuette, the Skytree mascots, the beckoning cats, wind-up robots, handcrafted makeup bags and children’s books under  designer posters by Tadanori Yokoo, and a model hot air balloon carrying a Santa Claus. Not to mention the normal stuff, cosmetics, magazines, canned coffee, ciggies, souvenir pastries, packaged fish and um, a flying horse. On top of which they do in fact dispense drugs – unusual for a hotel drugstore, as Hideko is a licensed pharmacist.

They met when they were 20. He landed in Tokyo at age 18 from Akita prefecture, a masterless samurai. 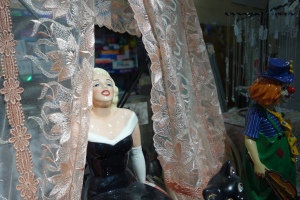 They met when they were 20. He was a masterless samurai, landing in Tokyo at age 18 from Akita prefecture, graduating from law school, then shifting focus to drama and literature. He followed the European pilgrimage of Buddhist author Hiroyuki Itsuki. A twist of fate launched him as a lyricist, and he’s had success with sentimental classics for artists like Ken Yabuki, for whom he penned the hit Nokoribi, 残り火, as well as collaborations with George Yanagi and Akira Senju among others.

Hideko focuses entirely on her customers, so when Ryo’s not writing or helping out in the store, he’ll be walking the dog around Asakusa or taking a coffee with the president of the Engei Hall cabaret across the road, or lunching with his daughter, who is a glamorous TV weathercaster, or doing those other things a proper man-about-town does.

Inspiration manifests in many forms. You know, I just wrote the song for my wife’s old elementary school, he says before removing his jacket to lend Hideko a hand, flattening cardboard boxes for recycling.