Sunday turns out to be a reflective sort of day as you stumble on this beckoning-cat shrine a bit north of Asakusa, with the twilight coming on and the indigo-dressed and jet-black haired woman with the natural smile outside the small attached kiosk selling lucky charms who says, Please take a look around if you like, before we close, as it’s five o’clock. She points you to the little annex next door where there is a sort of inner sanctum and even more cat trinkets and a pair of iron cats in the form of tables.

There was a woman by the river who made cats from the clay. Tomoe points toward the Sumida. Very good clay by the river. 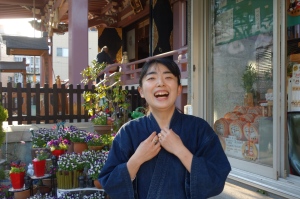 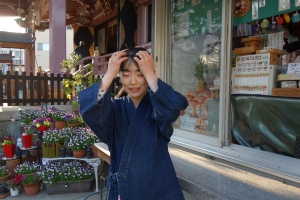 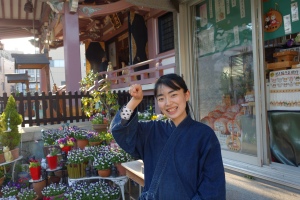 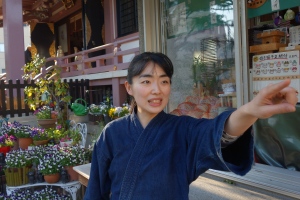 Back at the shrine at the top of the steps above the flowerbeds lined with plastic watering cans in the shape of cats, a couple of girls shake the bell rope and clap and pray, beside a pair of giant beckoning cats. You ask the indigo-dressed and jet-black haired woman, whose name you learn is Tomoe, What is this shrine called? It’s Imado Shrine! she says. How long has it been here? She says, I have been here, right next door, for as long as I have lived, 37 years. No, how long has the shrine been here? Oh! Hahaha! Since 1063! Nine hundred and fifty-one years! Why all the maneki neko? Because there was a woman by the river who made cats from the clay. Tomoe points toward the Sumida. Very good clay by the river. She quickly adjusts her jet black hair and strikes a beckoning cat pose.

In Asakusa you stop for flowers and tell Yoshiko the flower-seller you went to Imado Shrine, and she says, Oh yes that’s famous for its female priest, a woman about my age. It’s also the shrine to pray for marriage, she says. You saw the characters En Musubi, Destiny Together? No you didn’t, you say, and you had thought the shrine was for business success, because that’s how you associate those maneki neko, beckoning customers, and my, you didn’t know you were just talking to the priestess. Yes, says Yoshiko, at Imado those cats are for love. She asks, Were there many girls praying there? Oh a few, you say. She says, They also run matchmaking events. 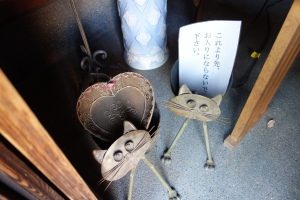 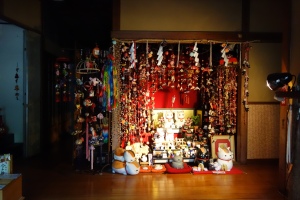 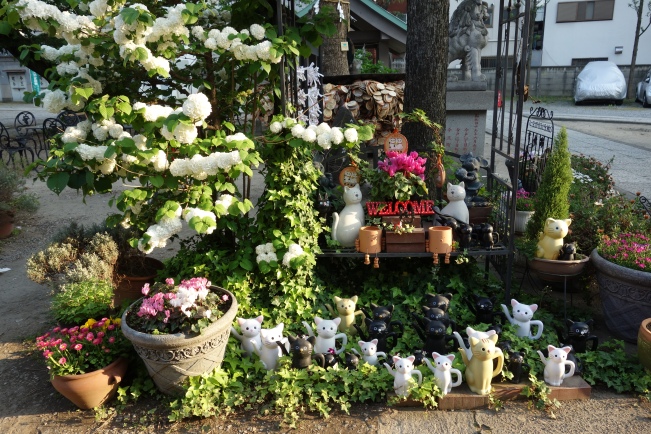 You see Imado Shrine has a cutesy website in Japanese and a blog by Tomoe where she announces she has a book coming out at the end of next January, and she writes a laughing apology for the somewhat immodest title, which she takes pains to say was chosen by the publisher, not her, and which is Gorgeous Head Priestess of Imado Shrine Teaches Everyday Conduct to Increase Your Happiness by a Factor of 10.