Yep, these are all we have left. No big sizes. We’re shutting down at the end of this month. We’ve been in business for 70 years. Our craftsmen in Saitama are in their 80s. You can’t get anyone to take over, even if you advertise. What’s that? Am I the boss? Oh no, that’s Imoto. See the shop sign. Imoto Dance Shoes. Imoto Kito is his name. He was in the shoe trade with my sister. My name is Hirokawa. Shichiro, that means seventh son. My older brother owns this building.

You know, at one time in the Bubble we had people doing overtime till nine pm! We started making dance shoes about 35 years ago. But sales really started falling from four or five years ago. Here is not like Europe with those social dance halls. And I know about those western celebrity dance TV shows. But dance was once really popular, for about 20 years. Showa era, on the Ginza.

I was 15 when we came down from Niigata in Showa 25, yep that would be 1950. There were seven boys – one died – and two girls. So yes, mum gave birth to nine kids. The girls were top of the family. Elder sister built this place after coming back from Manchuria after the War. She started us selling shoes. It used to be a zori-ya, shop for straw sandals. And geta, wooden clogs. All my brothers were craftsmen, only I was in sales. The economy was controlled. We had to line up to buy leather. People would come from the countryside up north with rice and things to sell, they’d come in to Ueno. 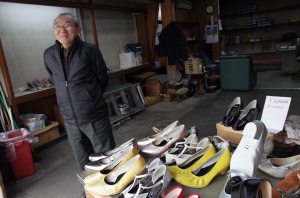 In Niigata my mum planted rice. Here we lived up the river, past Kototoi at Shirahige Hashiba. It was fun. It was common during wartime for families to have lots of kids. All my schoolfriends were from families of six or seven. That’s why we have numbers to our names, like kazu in Kazunori is one, Goro is five. I’m seventh, like I said.

I am 80 years old. I still like to catch up with my school friends. We had a lunch yesterday, a bus took us out. But many are dying or getting sick. Too much drinking. I stopped drinking when I was 50. I gave up smoking at 40. The other guys, you’d say, You should stop and they’d say, I know, I know – but they wouldn’t. Now I’ll get a phone call from a wife, So-and-so is in hospital, on a drip, being fed through a tube. That’s what happened to my best schoolmate. 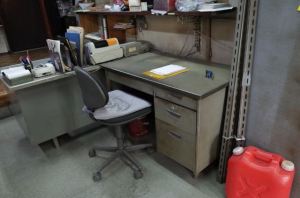 The river got incredibly filthy from the early ’60s. The time of the income-doubling policy. Factories upriver pumped out poisonous waste. Everything died, there was no shijimi, no fish.

We used to do a good trade. At times we had 6,000 pairs of shoes down here and upstairs. Six thousand! For a while my sisters and relatives used to live here, and neighbourhood boys would come around.

If you look up and down this street it’s all modern buildings. There are not many like this. Look at our timber ceiling, or the facade. That’s right, my sister didn’t skimp on making this place. And it’s going to be used again. This interior will all be redone. We will have a new tenant, selling women’s fashion. 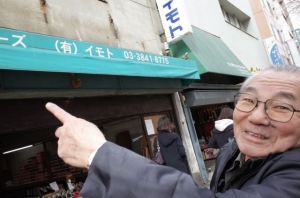 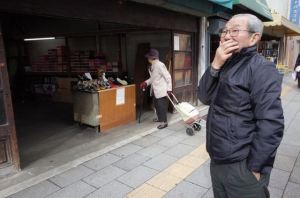