The world is in trouble this sunny Sunday afternoon near Sensoji temple. But it’s nothing the goofy superhero Golden Bat can’t fix. Entertainer Akio Narasawa, whose stage name is Gengorou, narrates this struggle of good and evil through the proscenium-arch frame he has mounted on his bicycle, sliding the storybook cards in and out as he describes the dialogue and action with perfect dramatic timing. 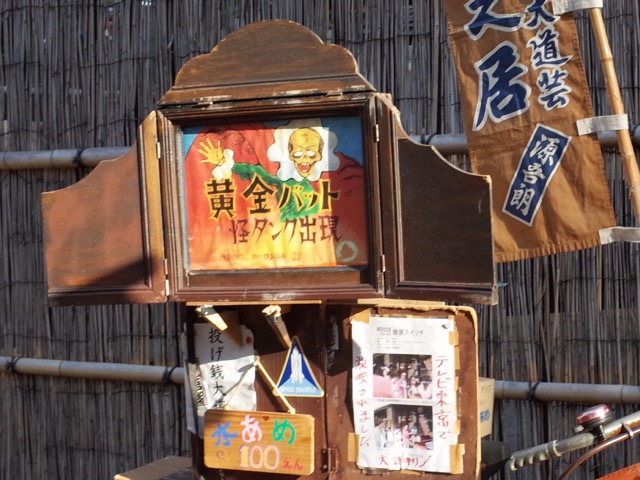 Gengorou is one of Tokyo’s three remaining performers of kamishibai “storyboard plays”. The other two, he says, are in their 70s and 80s. Himself in his 60s, until 30 years ago he performed comic roles with a theatre troupe. Now with his self-contained portable venue, he looks after everything. The acting, directing, sound, lighting, and box office (a hat).

He says, My audience is children but also adults who remember these plays from their childhood. Probably around the last Olympics in the mid-1960s.

Golden Bat was ahead of its time. It debuted in 1930, five years before American comic hero The Phantom, and a whole eight years before Superman.

Companies invite him to appear at anniversary events. He also performs at cultural festivals, even mochi rice-pounding ceremonies. This weekend I am heading to Yamagata and Sendai to play at Marine Day for children in the earthquake zone on July 20th, he says. I get paid something, but it’s mostly voluntary.

His repertoire stretches to about 50 plays. They include Yamanba, or Mountain Hag, which he performed in Mongolia by reading the script phonetically. Ougon Batto (Golden Bat) is a favourite.

Golden Bat was ahead of its time. It debuted as a kamishibai in 1930, five years before American comic hero The Phantom, and a whole eight years before Superman. It later became both a movie and an animated series. The Indy Jones-like premise has the eccentric hero with the skeletal face fighting the Nazi-like forces of Dr Nazo, or Darkness Bat. This begins when he is re-animated from a big sleep in an Egyptian sarcophagus, after being splashed by the tears of his discoverer’s daughter.

Watching Gengorou perform you marvel at how in this digital, virtual-reality age kids can still become transported by something so elementary. Indeed, kamishibai is so radically analogue it’s of another dimension. Perhaps that’s part of its appeal. The audience cries and gasps as Gengorou builds the suspense.

He does make a bow to Hollywood: in one picture of Golden Bat, the red cape is made from an actual scrap of fabric. Gengorou produces a folding fan, says, “Look! 3-D”, then fans the cape from below so that it flutters. 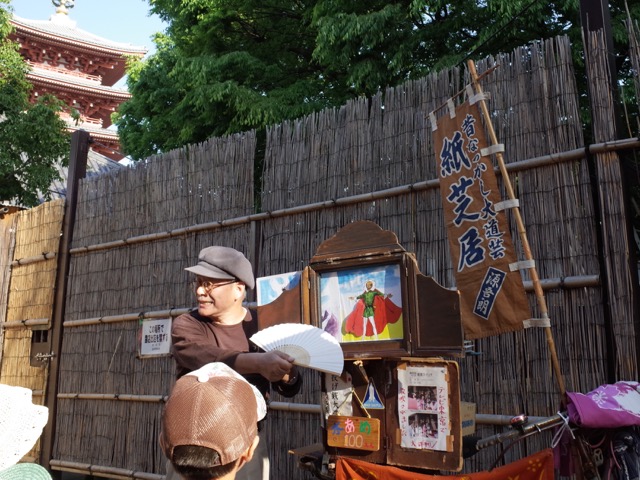 Mr Kamishibai Gengorou performs on most weekend afternoons on the northwest approach to Sensoji temple, Asakusa 2-chome opposite the Gorogoro Chaya near the Mokuba theatre. He is available for events. Some English spoken. Tel 090-2642-3747

One Response to Golden Bat Theatre