The tandoor has smoked the place out so it’s a good thing there are no customers right now. One of the staff, maybe Laxman, the tall guy in the waiter gear, has taken a rock and propped open the front door. Cold air rushes through. He greets you as usual. Sit here, he says, out of the draft, and moves the rotating heater closer.

In the kitchen young Tulsi is skewering red pieces of meat. The older chef Sharma is filling momo dumplings with chicken-mutton keema. It’s Kul’s night off, so you will get his snapshot tomorrow. You want to have the whole “family”.

Panas, it means “lamp”. On Kokusai Dori, International Street, Asakusa. The neighborhood place – by definition, where you feel at home. Nothing extraordinary. Here you can be in the world but not of it. Anonymous, yet welcomed. Chatty, or unsociable. Dress however you like. No one makes demands. Bring anyone. Convenience, consistency, freshness, price, space to stretch out with a book. 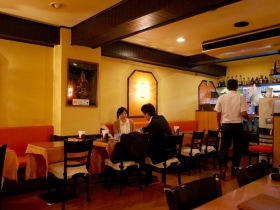 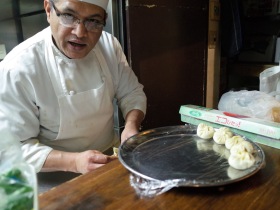 Simple things. Salad of cabbage, red onion and mizuna, lemon juice and chilli. Or the chickpea one. Kebabs of chicken thighs in a mint sauce. Sag mutton. The tandoori.

It’s almost never crowded. Locals gather and drink and laugh loudly. Smoke. It’s popular with small groups of women. And salarymen. One night, after eating, a backpacker couple from South Africa say they have no cash. They have a credit card but Panas doesn’t take cards. The card doesn’t work in the ATMs. They’re shrugging their shoulders. They’d really like to help out, you know, but maybe there’s no solution. Kul thinks of one. He’s the man on the till. He walks them to the Don Quijote variety store. After half an hour he comes back laden with kitchen stuff worth the bill.

It looks Indian but everyone is from Nepal. After the earthquake, you checked. Their families were OK. Panas advertises “yakuzen” cooking, that is, “medicinal curry”. Laxman says, Now it is cold and it makes you feel warm and strong to eat this curry. In hot weather too, the other way around. You don’t get many more details about it though. Perhaps it’s just time-honoured food therapy.

Two big trophies are either awards from the local chamber of commerce, or simply decorations, depending on who you ask. It doesn’t really matter. It’s your place. You give them a prize.