If he’s not working on a job or holding forth to a customer, watchmaker Takashi Arisaka likes to sit back on the tatami in his living room beyond the shop counter. Perhaps he is watching TV. You can see his bald head through the glass door at the rear. He has his arm stretched over his head. He gets up and comes out when a customer from the street sets off the automatic bell. A couple of old cats lie about on the worn wooden parquetry. One is half-blind. Cats around here get neutered and then their ears are notched, Arisaka says. So the cat catcher doesn’t get them.

Pictures from a community drawing group decorate the entrance. A German grandfather clock ticks quietly. It takes two days to overhaul this, Arisaka says. It’s the first clock my father bought when he opened the shop. But I had to disconnect the chimes or it goes off every 15 minutes and drives you mad.

His father was a watchmaker at Seiko in Kinshicho. He opened his own business here in Higashi Mukojima, across the Sumida from Asakusa, in 1949. The area was then called Tamanoi. It was a flourishing red-light district. Arisaka studied watchmaking at a college near Ueno. 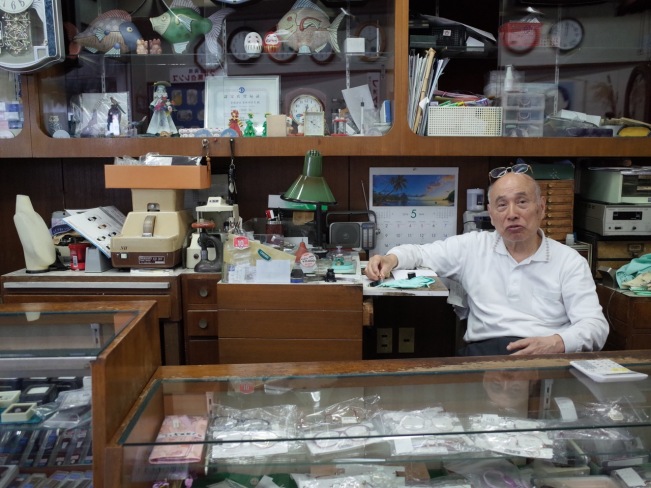 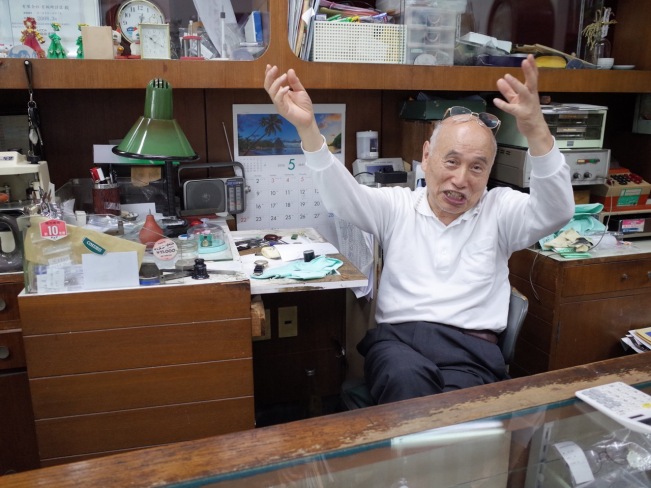 Philandering novelist and essayist Nagai Kafu, who died in 1959, made Tamanoi famous. A Strange Tale from East of the River describes a bittersweet dalliance between the central character and a kimono-clad working girl, who picks him up one rainy evening. She ducks cheekily under his umbrella, gets him to walk her to her house of assignation, then invites him in for tea. The affair lasts as long as the summer, with its relentless mosquitoes, the smells of the canal, the sharp banter, his gifts, the allure of sex.

At its peak, Tamanoi boasted hundreds of bordellos, and six- or seven-hundred women. Many were originally from Tohoku. The first of them moved in around 1919 due to redevelopment at their previous base behind the Asakusa temple. The Tamanoi licensed quarter expanded following the 1923 Earthquake, then again with the new Tamanoi station on the Tobu railway – now the Skytree Line – and again during the post-war period. It became crowded on weekends. The backstreets were labyrinths. There were boardwalks above open drains and small canals. Signs advertised Walk Right Thru, Safe Passageway, and Short Cut. Normal behaviour was suspended. Kafu writes (horror of horrors), A passerby in broad daylight ran the risk of having his sleeve tugged at or his hat snatched.

The affair lasts as long as the summer, with its relentless mosquitoes, the smells of the canal, the sharp banter, his gifts, the allure of sex.

Not everyone played willingly. A cheerful woman in her late 60s you meet one day at Arisaka’s, whose family runs the paint shop up the road, tells you the story she heard of the barefoot girl dashing frantically, trying to escape, as the bordello men chased her down. They took her back, says the woman. She laughs. I know it’s not really acceptable to say, but it used to be a very interesting area. Mothers enrolling their children at school would never say they lived here. They’d write down Kanegafuchi up the road. 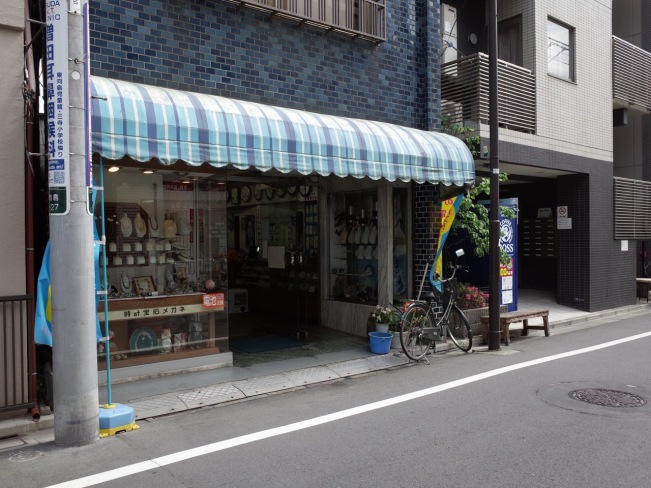 Tamanoi took in all sorts. Arisaka says, All the houses were small, just with one or two women. My mum knew a couple down the street. I had a friend at school whose mum worked. One afternoon I went back to his place and everyone was talking in Ishikawa dialect. It was like another world.

The Arisaka family lived beside a pachinko parlour. He says, I could hear the neighbours talking on the upper floor. On weekends they would get drinking, and they normally spoke Japanese but the more they drank the more they spoke Korean.

He remembers his father staying open until 3AM during New Year’s. It was a good time to sell expensive ladies’ watches to expansive-feeling gents. There were five watch shops in Tamanoi alone, says Arisaka.

The stores ran a clever shadow economy. Under Japan’s strict customs law, they could only sell imported watches affixed with official Duty Paid stickers. Of course importing the watches legitimately was expensive. You could bring in identical watches far more cheaply – but without the essential sticker. The fix was this: a working girl knew when she received an expensive duty-paid watch, she could take it to the shop and exchange it for an unofficial import. The watchmaker would also give her about half the price of the duty-paid item — which went back in the window to be sold to the next starry-eyed john at an exorbitant price. And everyone was happy.

And then the boom ended. Prostitution was outlawed in the late 1950s ahead of the 1964 Olympics. Arisaka was a kid when the ban came in. I was third-year middle school, he says. Sheesh. I just missed the action! 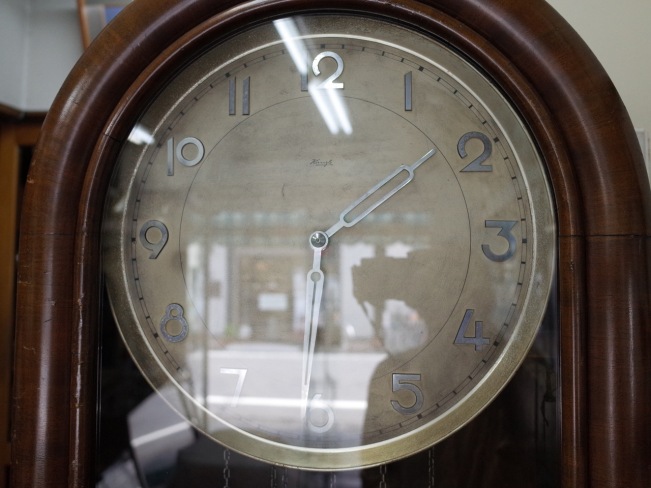 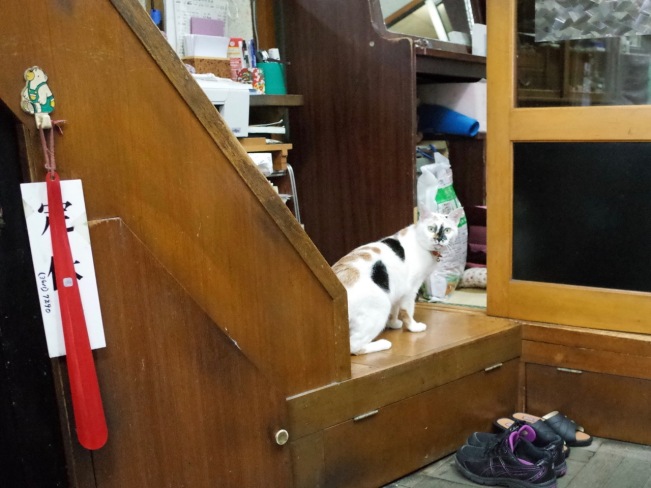 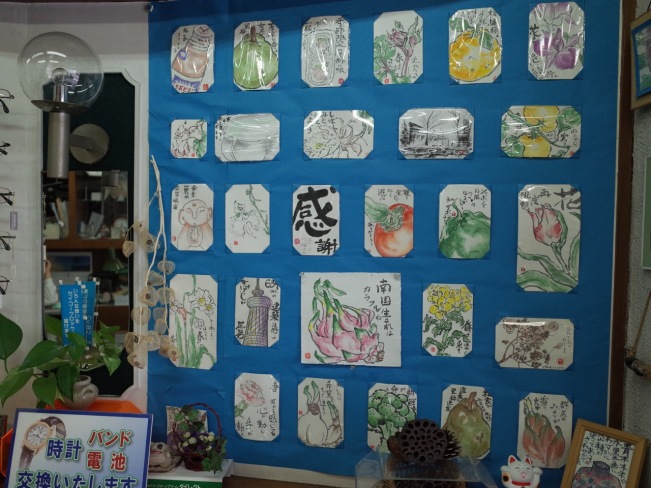 Arisaka Tokei-ten is now the only watchmaker around Higashi Mukojima station. Arisaka no longer keeps a small lathe to make his own watch parts. Few people get their things repaired anymore. And the department stores no longer farm out so much work. You used to be able do well with those expensive watches, he says. Fifty thousand to fix a Patek. I fixed one of the civil servant’s Rolexes you know, everyone said it couldn’t be done.

See how it goes, he insists. If you think it was worth paying for, you can give me something then.

He is 74 years old but still up for a challenge. On the recommendation of the woman who runs the Tamanoi Cafe two doors up, you take him an antique gold Swiss watch that has stopped. Another watchmaker has quoted around 50,000 yen to fix it. Arisaka says, I don’t know if I can repair this. It’s old. But I’ll give it a go. If I can, I’ll charge you 10,000. If I can’t, I won’t charge you. How about that? It might take some time – and you can’t give me a deadline.

It does indeed take weeks. But four months after you pick it up it’s still keeping time. He refuses to take any money at first. See how it goes, he insists. If you think it was worth paying for, you can give me something then.

The fee he ends up taking is half what he quoted. You find out later he took most of the watch apart, rinsed the parts, sourced some new ones, before putting it back together. As a financial prospect, his working style makes no sense. Which is what makes it priceless. 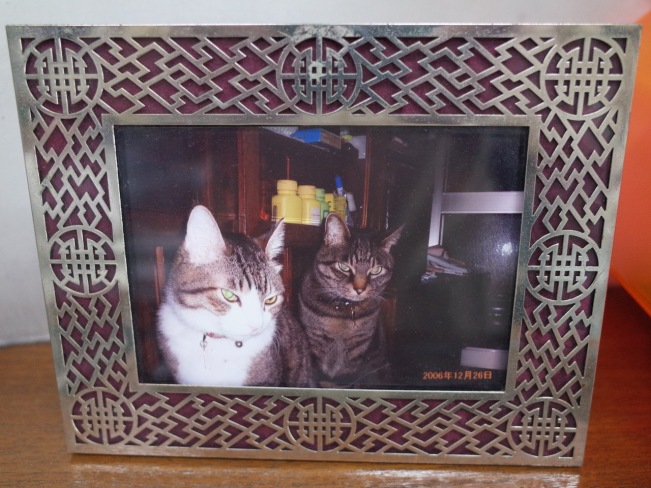 2 Responses to Time After Time