The family that sells oil together sticks together. Masajiro Isomura began wholesaling sesame oil and other cooking oils in 1935 at a building across the main road from here, but it was destroyed in the US wartime fire-bombings. Friends lent him new premises to help him restart, and now his eldest son Kyoichiro – the company’s current president – and grandson, Toshimitsu, operate from this shop-house off Kokusai-dori, near the Pelican Bread bakery and Tawaramachi Station.

You can sense how the two men work with an unspoken understanding, an ease that comes from growing into the job as father and son. On his smartphone, Toshimitsu still carries a picture from 1971, on Kyoichiro’s knee. Beside them is grandfather Masajiro, who died at the start of the Heisei era aged 79.

Named after the founder, Isomura Masajiro Shouten is both a retail and wholesale store, selling not only sesame oil but cottonseed and others. If you’ve eaten good tempura around here or indeed at many places in Tokyo, you’ve probably enjoyed Isomura’s delicate and rounded white oil, made from unroasted sesame and with a high smoke point, making it suited for deep frying.

They call it Mago no Goma, which means Grandchildren’s Sesame. A play on words, since the syllables read identically backward and forward.

Toshimitsu has lined up the bottles so the contents look clean and golden. The colours differ depending on the roast, with the aromatic darker oils best for dressings and sauces and as the Isomuras have found, good in pastes and jams. There’s also a medium-dark roast made from premium seeds that the company commissions on its own. Isomura sells it only in smaller bottles and it costs around 1000 yen. Add it preciously to food or as Toshimitsu suggests, drizzle over ice cream. 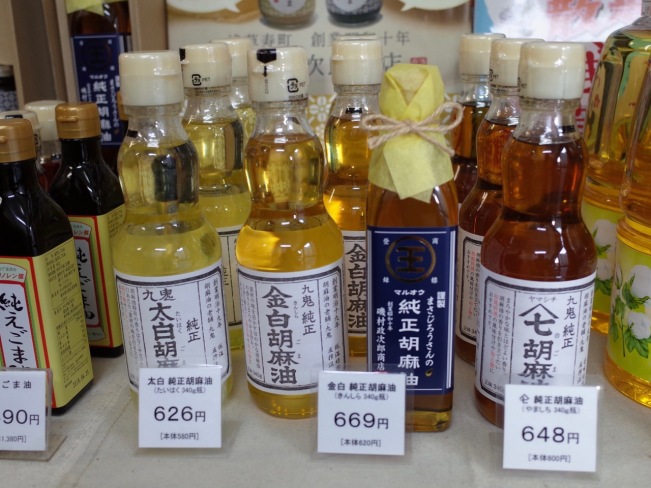 Shitamachi people running small factories and businesses often face problems finding successors, or getting their kids involved. Old Masajiro suffered no such hurdles. His successor Kyoichiro was one of seven children (the youngest was a girl, says Kyoichiro, just like Benten of the Seven Lucky Gods). And with grandson Toshimitsu ready to carry on, the future seems secure. Other members of the family have joined in. One of Toshimitsu’s cousins is a graphic designer and another makes jam. The three of them developed a new sesame spread, using black and white crushed sesame seeds, sweetened with ingredients like honey and maple syrup. They worked on the recipe over two years and designed elegant labels for the black and white versions, before launching them in 2015.

They call their product Mago no Goma, which means Grandchildren’s Sesame. A play on words, since the syllables read identically backward and forward. The name is apt, since it’s the kids who will carry on Masajiro’s legacy. 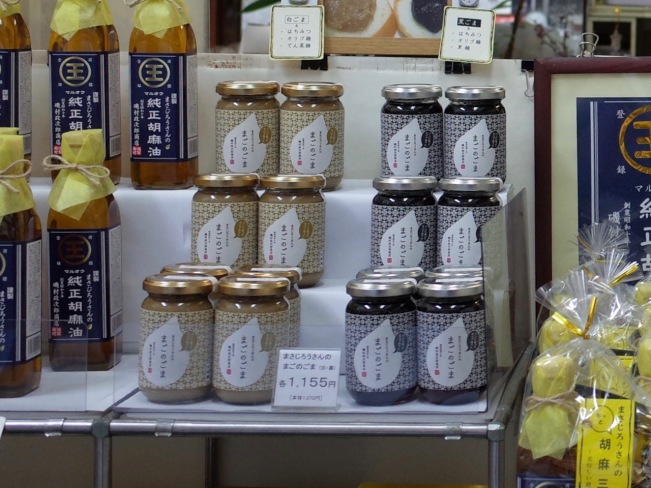