I asked for it spicy and the master of this small Korean BBQ restaurant in east Ueno, who wore a chef’s hat and also took my order, put it through to his wife behind the kitchen window, and she made a stewed beef claypot lunch that was powerfully hot, just right for this warm afternoon following a swim at the next-door pool. 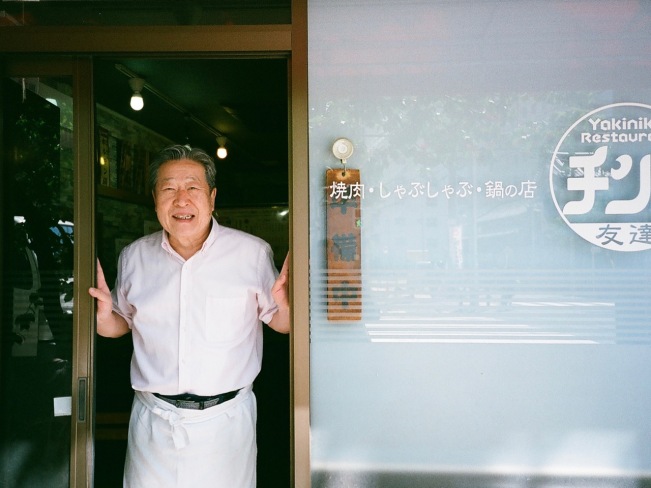 I often meant to try it. It’s one of those places, you know, your antenna says, you should just go in and eat there, not necessarily because it looks delicious or even especially welcoming, but because it looks right. As if everything is in balance. A professional, homemade food place, clean and able. Satisfying. It looks like there won’t be too much or too little of anything, and the cooking and ingredients will be fresh and reasonable, the service will be no-nonsense, it won’t disrupt your mood, there are not too many seats.

The flat-screen TV is showing commentary ahead of the North and South Koreas summit. After bringing out my tray the master sits at one of his tables, chatting with a customer finishing his lunch.

He gestures at the TV, It’s historic, he says. Maybe something good will happen. Then he points through the front window beyond a young woman eating alone, who is the only other customer here, and says, Can you see, the cherries have come out. The other day they were just flowers.

The woman looks and says, Wow! He says, You can eat them. They’re not ripe yet but it won’t be long. You can make a good jam, though the tree belongs to the landlord and he watches us from next door so we can’t take too many. But you know, people steal them, and some have even climbed up there and broken off branches. Unbelievable isn’t it?!

He says, I’m going to close for a few days during Golden Week, to go see my mother-in-law in Korea. Do the right thing. It’s a bit of a hassle but you gotta do it while they’re alive, right? There’s nothing to be done for it after they’re dead!

He says, Usually I take Sundays off, and maybe another day. It depends. I used to run a second restaurant near Don Quijote in Asakusa but it got too much. I never got a break. But I grew up in that neighbourhood. I was a snotty nosed kid around the drinking holes. My mum sewed traditional Korean clothes, my dad was never there.

They lived behind Hoppy-dori, the tourist street of open-fronted eateries with the bossy girls in shorts and T-shirts who tout for customers. I say, It seems like many of those places are run by Koreans. He says, You bet. Everyone. It’s nothing but people from Jeju island.

After I pay, he shakes my hand at the door and leans in conspiratorially. Come again, he says. You know, I make the best stewed beef in Asakusa. 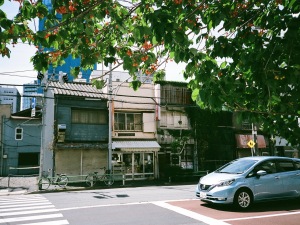 I’m taking snapshots of the cherry tree when suddenly a small man emerges from a sliding door behind me. He looks like he is off for an errand. He is quite old and a little unsteady on his feet. But he seems happy I am photographing the cherries. The restaurateur, who has also come onto the street, introduces him as the landlord. I had a vision of someone more possessive of his splendid tree, maybe even a bit cranky, but he says hello warmly and asks where I am from, etcetera, and shows a big smile with no teeth. He says, The cherries aren’t yet ripe but you must take some soon! Then he wobbles off. 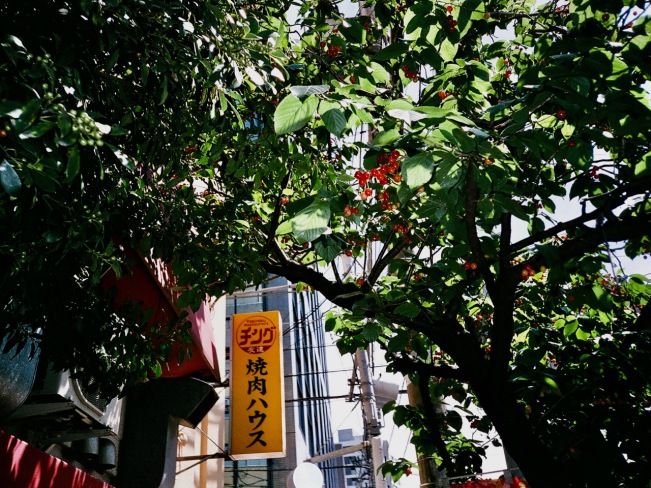 I seem to run into elderly gentlemen with things on their minds. The same afternoon on the way to the station, I walked through Kotobuki near the Lemon Pie cake shop, past the home of bucket-maker Hiroshi Miura. I wrote some years ago about Miura and the miniature wooden houses he carves. I was hoping he might be there, maybe tinkering with something on the raised area just beyond his entrance well.

His handiwork is still on show outside, lined up on the asphalt, though much more neatly organised than it used to be: a cedar fish tank, a waterwheel and other items. But I never see him these days. I gave him a leather notebook for his 88th birthday but that was a few years ago. His daughter lives there too. One night I ran into them near the 7-Eleven, she had taken him to a restaurant.

He looked very frail. Then later I saw young people clearing out the ground floor, the papers and tools and pieces of timber. Perhaps grandchildren. i thought maybe he had died. They left some bits and pieces as decorations, and you can still see them through the glass doors. But you can also see somebody has installed railings inside the room. They are the only thing that suggests Miura is still around.

But no sign of him today. As I reached the corner of his building, an elderly man with a bent back scurried past me and put a postcard in the letterbox of the house next door, then turned and headed back. I asked, Do you know Hiroshi Miura, he lives here, and he makes things such as aquariums and model houses. The old man said, What’s that? No idea! and hurried off.

He seemed hard of hearing, so I said it again, and he said, You taking photographs!? He seemed very impatient. He moved quickly ahead of me and opened the door of a white mini-van. I thought he was going to leave, but then he came back with a takeaway food container.

You know about lizards? he said, thrusting forward the plastic box for me to look. It contained a tiny dragon-like lizard. He said, It’s an imori. He pointed out its white belly and said usually they are red. 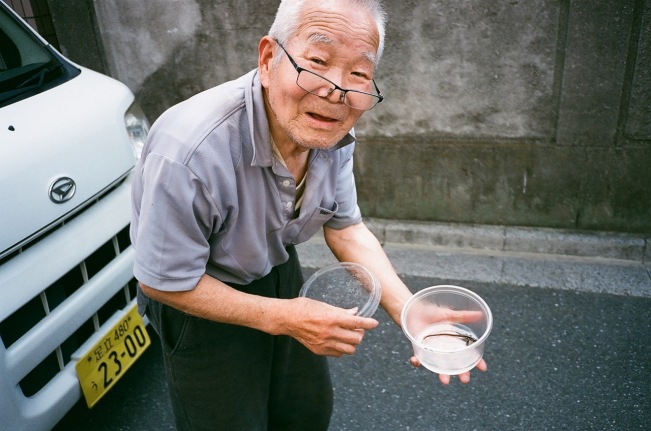 I’m feeding him rice and he’s eating it! said the man. I asked, What will you do with him? He said, I will keep him until he dies. He spoke very fast with a countryside accent that jumped as much as his train of thought. He was at the same time keen to talk and anxious to leave. Suddenly he jumped back in his van, started the engine and drove off, only to stop further up the street near the corner of Asakusa-dori opposite Higashi Honganji temple. He got out and took another postcard around the corner and by the time he came back to the van I had caught up.

He was now talking about Fukaya, a town in Saitama of which he was clearly proud. He said, Fukaya is famous for making bricks. Didn’t you know those red bricks went into Tokyo Station? And that Fukaya had a station just as grand? Then he mentioned the emperor, and here it became a bit fuzzy, because he either said the emperor visited Fukaya, or perhaps the emperor used the part of Tokyo Station made from Fukaya bricks. Later I learned Fukaya has a railway station that is modeled on Tokyo’s, and the town is indeed the birthplace of the Japan Brick Company.

When he grew tired of talking to me the old man didn’t say goodbye, he just drove off.

It was one of my more puzzling encounters in the neighbourhood. Later I thought about associations I may have triggered, since I had asked about a man who made fish-tanks, enclosures to keep animals, which may have related to his showing me his lizard (so to speak), and the mention of miniature model buildings could have prompted the diversion into Fukaya station. But that’s just speculation. 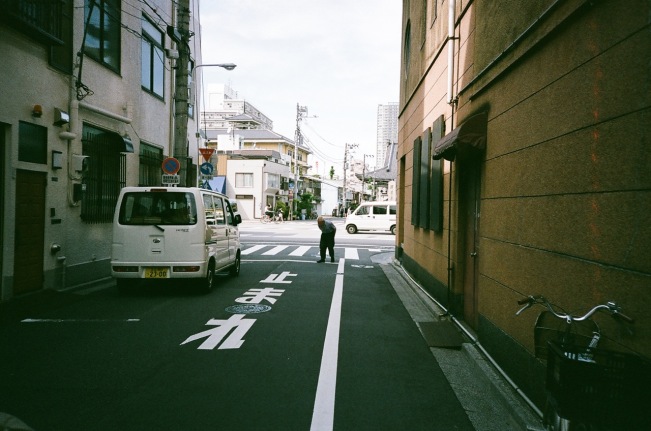