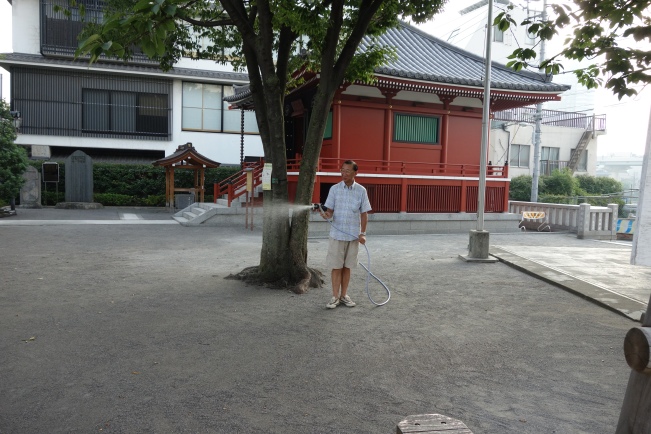 A man wearing glasses is watering the grey sand in the grounds of the Komagata-do shrine by the river, early in the extremely hot Saturday morning. He is spraying his sprinkler hose and it looks refreshing. He smiles across the low granite fence. You are passing a few meters from him, on the big corner where the lights have now turned green. Cars and trucks jostle for the bridge. So you cross into the shrine to say hello and be near the cooling stream.

The watering man indicates some sound equipment he’s stowed under the raised verandah and says, starting in 10 minutes at 7am, we are holding our final summer session of Radio Taiso, Radio Exercise musical calisthenics, for the neighbourhood kids.

It’s the classic public health activity you can see on national TV every day, with piano music and benevolent counting aloud, performed by three strong-looking women in satin-sheen tights and shorts. One of them stays seated so old people can join in by putting the arms behind their heads without getting up, and so on. 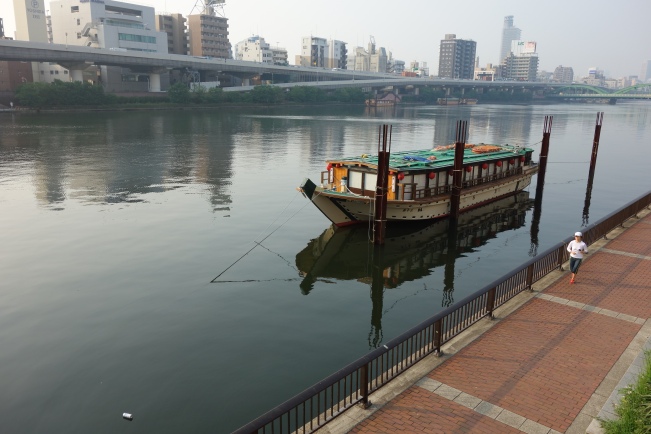 You wander away for a bit to look at the soupy green river and the moored yakata bune restaurant boats. A couple of young lovers are kissing passionately under the bridge. He is braced against the concrete and she is straddling and almost on top of him – almost eating him! It’s hard not to look. It looks rather nice. 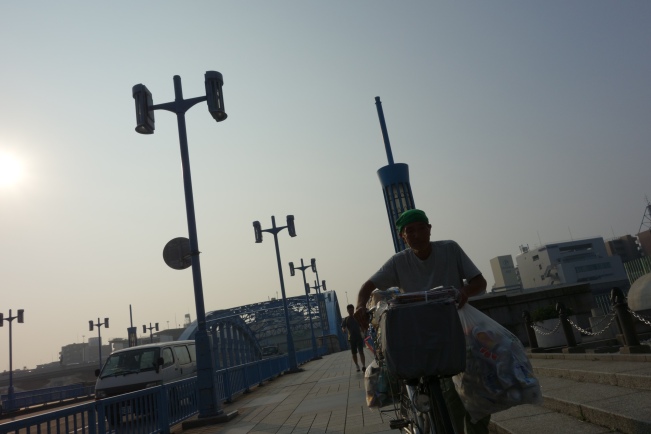 A sunburnt man on a bicycle collecting cans in huge clear plastic bags teeters past.

The shrine is now a throng of youngish dads, mums with their limousine bicycles, children of various ages in colourful gear, and the old men from the neighbourhood association. Their shirts are white with embroidered patches showing a smiling side-stretching kid and the words for the ward, Taito-Ku. The kids stand haphazardly across the sand. The music starts and a man with a microphone gives lilting instructions. Your eye is drawn to a wiry, elderly man with a bright birdlike face. Dressed in white shirt, white jeans and a white cap, he looks like he belongs on the river. He is standing just outside the shrine, on the corner, keeping an eye on everything while pulling some perfunctory movements like opening and closing his arms.

My name is Funato, he says. That’s Funa for boat, and To, he says. You think perhaps To is the character for head, but you’re not sure. That would make him Boathead. He tells you he is born and bred in Asakusa and has lived here for 81 years. Doing all right for my age, aren’t I, he says. He still shows up for over-70s baseball, though doesn’t play since a heart operation. He is an organizer with the Kaminarimon East neighborhood association. 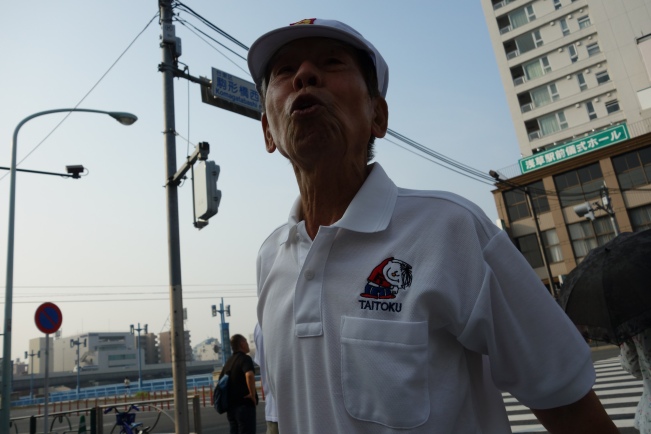 We’ve done 20 consecutive days, from July 21, he says. And look at how many kids we got today, that’s because we’re giving out certificates, and there’s a lottery and also toys. Suddenly he says, Now look at all those bicycles. They could cause bother to passersby, they should be parked more neatly. He goes off toward the bikes parked against the shrine fence.

Another man appears. Later you learn his name is Atsushi. He says, you should talk more to Funato, because he knows everything about Asakusa. He will tell you about the wartime firebombing, when everybody had to jump into the river to save their skins.

Every summer is weighted with the war. Of course spirits of death come every year, in this heat, in this O-bon Buddhist feast to honour the ancestors, but the war makes summer as if summer is a bag with something heavy in it, which is the war, and when you sling it on your shoulder the heavy thing shifts to one corner and you try to find a balanced way to carry it, but you can’t and it elbows into you. You can’t help feeling an irony that it’s a relatively recent way to mark summer, compared with O-bon, but it’s as if the two have been entwined forever. Yesterday was the 68th atomic bombing anniversary in Nagasaki.

Atsushi and Funato are talking about the best unagi eel restaurants. Funato is particular about whether a place opened before or after the war. Koyanagi in Kaminarimon is the place to eat unagi, he says. It’s been going since before the war.

The Taiso session ends and a distinguished looking man with silver hair and a moustache and suit jacket says a few words and gives a certificate to one of the boys, then the other kids line up for theirs, and also for their toys, things like pump action water guns and ball and string games. Funato tells you the man is the owner of a local wagashi traditional sweets shop, but … there’s one nearby called Nishimura which is older, as his one opened after the war.

Much later, heading home, you pass the shrine again, vermillion vivid in the twilight. Its sleek new renovation hides its history. Komagata-do features in a couple of 19th century woodblock prints by Hokusai and Hiroshige, but some 1,000 years earlier it was central to Asakusa’s creation. The story goes that in the year 628, two brothers fishing on the Sumida hauled up their net to find in it a statue of Kannon, the Buddhist deity of mercy. Despite their efforts to dispose of it, the relic always returned. News spread of the miraculous Kannon and worshippers flocked to its new home at Komagata-do. So much power did it have that many years later, a rich patron built Sensoji to house it, and it was moved. But you can’t see it there, because it is locked up in the inner sanctum. Perhaps it wants to get back to the river. 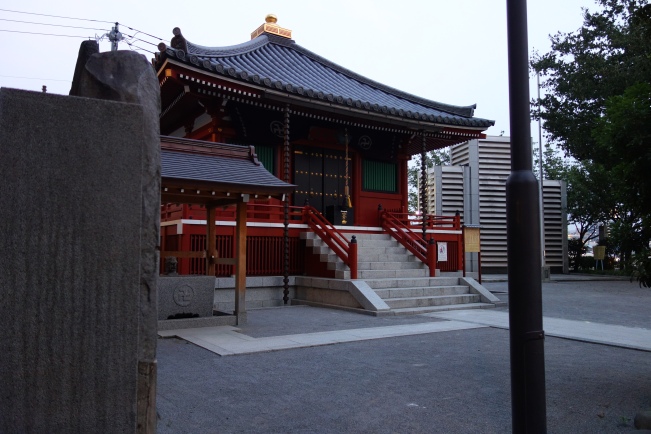 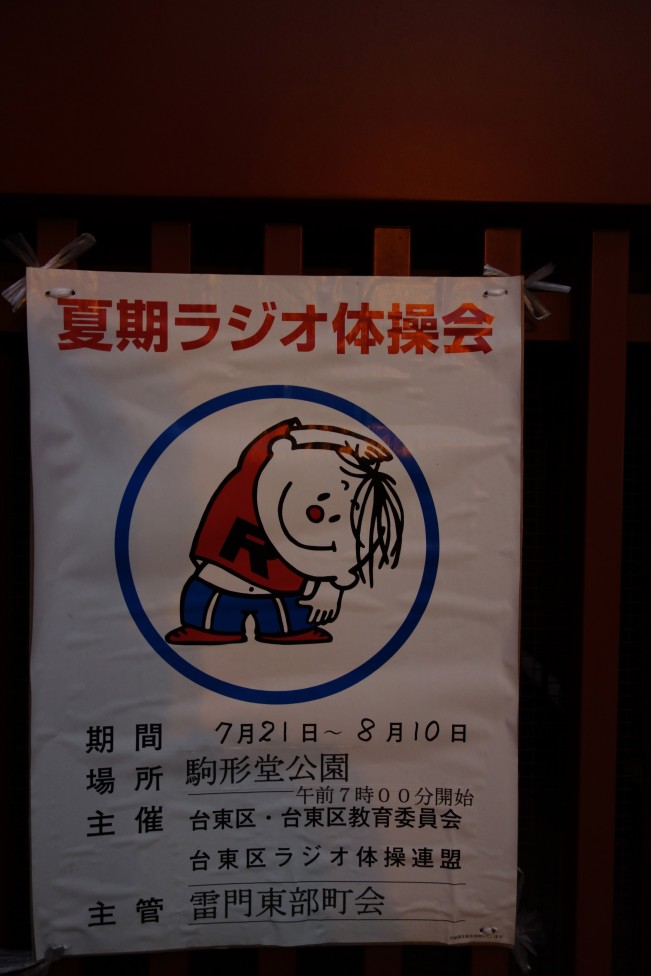