You like this kind of neighbourhood. Tumbledown buildings that somehow do the job. Deceptively ramshackle. They live and grow with the residents. Faded and clean. A sort of pride. Patina of old modernity. Nothing to prove. The locals have patched up, rebuilt, added-on. Huh? Not allowed to build on the roof? Says who? They’ve given things an aura. The row-houses seem to have faces. An old cherry tree juts into the street. A cement frog. A pot-plant arcadia.

There was a notice on social media: “Tour of Torigoe’s Surviving Prewar Buildings, Vol.1., 500-yen.” It said 10 to 15 people could join. The rendezvous is Okazu Yokocho – Tidbits Alley – five minutes’ north of Kuramae. It’s a traditional pedestrian mall, named for the stores selling the okazu side-dishes that go with rice – pickles, miso, sweet-simmered beans, kombu and so on. Also a butcher, fish shop, izakaya, weaver, tea merchant and others. Though there are less of them these days.

Tour organiser Yasuyuki Honma is a shoemaker and accessories seller. Backward baseball cap over longish gray hair. T-shirt. Witty and laid-back. The point of the tour is simply that he moved to the neighbourhood last year with his accessories and shoe label, Cloom, fell under its spell, and wants others to appreciate it. You might add, “before it all goes.” Cookie-cutter condominiums are sprouting as we speak.

Honma lives and works in one of the nagaya – two-storey, corrugated-tin row-houses. They were built in 1928, five years after the Great Kanto Earthquake. Honma’s landlord, Masao Tasaki, is your guide. Torigoe-born-and-bred, his enthusiasm matches Honma’s. So don’t mistake him for somebody elderly. You see he has the energy of a boy.

Clams from Tokyo Bay were preserved and used as currency.

Once everyone has assembled Honma hands out some architectural notes and you set off down the mall. At the corner, Tasaki points up at the copper-clad sake shop and says that in the Taisho era (1912–1926) it became possible to produce the protective metal sheets as thin as three millimetres – enough to easily work with. You will see various such buildings. The copper was also shaped to protect the eave ends, the dashi-geta and the fluted accordion, jabara, architraves.

In a backstreet across the main road, Kuramaebashi Dori, he says, We are walking on a river. He says some of the lanes here are covered-over canals. He describes how Edo used to be a river society. Small boats were the cheapest way to shift goods. Clams from Tokyo Bay were preserved and used as currency. He points toward the Sumida and says, See how we are standing in a sort of depression. Tons of earth were taken from this area in order to build the huge kura – the rice warehouses – that once stood on the riverbank and gave Kura-mae its name. Mae means, in front of.

Honma says, Carrying the shrine is not about muscle. It’s about rhythm.

Cross back over the road and enter Torigoe Shrine, a small grove of big, shading camphor and gingko trees. Tasaki looks up. He spends a lot of time looking up, and inviting you to do the same. He says the pillars of the torii gate are not concrete, but single, massive pieces of stone. The shrine is home to Torigoe Festival, and Tokyo’s biggest o-mikoshi portable shrine, which locals jostle to carry – a four-ton monster. People say its beams are too big to get an arm around. Honma says, Carrying the shrine is not about muscle. It’s about rhythm.

Tasaki says that after the war, the head priest here committed suicide. He wanted to atone for all the people he helped lead into militarism. 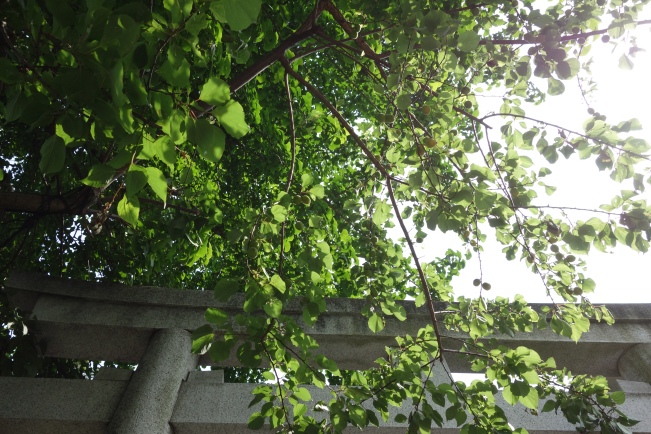 Keep walking. Stop by the facade of a house where at either end of the glass sliding doors, door-sized panels jut out. These are the storage spaces for the amado, sliding storm-doors. The panels in wealthier houses were a single board of quality timber, or hammered copper, in patterns like waves or checks. The high-grade wood is a hidden sign of luxury, says Tasaki. Cheaper houses had panels joined from several pieces.

You stop at a sort of gallery that seems to be run by a friend of Honma’s. She delivers a small lecture on the space. It’s made of two 40-foot shipping containers. You get talking to Tasaki. His business is food-product wholesaling. His father moved to Torigoe in 1937. The business struggled after the war, he says, squeezed by major trading companies like Marubeni. He has an explanation. He says, I can’t help feeling that the thinking behind capitalism is not to raise up those around you, but to crush them, to push them down. Then he laughs.

He stops at an old house with an Edo-style security grille: thin bars of wood. Who would they stop? Thieves who played by the rules?

The road you’re walking on makes an abrupt dogleg. Tasaki says it’s a holdover from the Edo period. It was for security, a sort of checkpoint. You couldn’t have an unhindered run into the capital. He stops at an old house with an Edo-style security grille: thin bars of wood. Who would they stop? Thieves who played by the rules? Then again, given the density of population and the intimacy of the neighbourhood, it’s unlikely anyone could snap the bars unnoticed.

It’s remarkable that anything survived the firebombing of 1945, the final year of the war, which targeted the district’s many small industries. On the night of March 9, B-29s dropped over 1,600 cluster bombs each holding 38 bomblets of napalm that burst into flame after scattering. The evening’s death toll was 100,000. Tasaki says he heard of 20-metre walls of fire reaching back to Kaminarimon, a couple of kilometers away.

You come to a solid-looking building, neatly repainted. Tasaki says it was a printing factory. He stretches his arms across a pillar. Its dimensions seem to give comfort. Then he bends down to point approvingly at the ventilation grill in the foundations. He says, They knew how to deal with humidity. 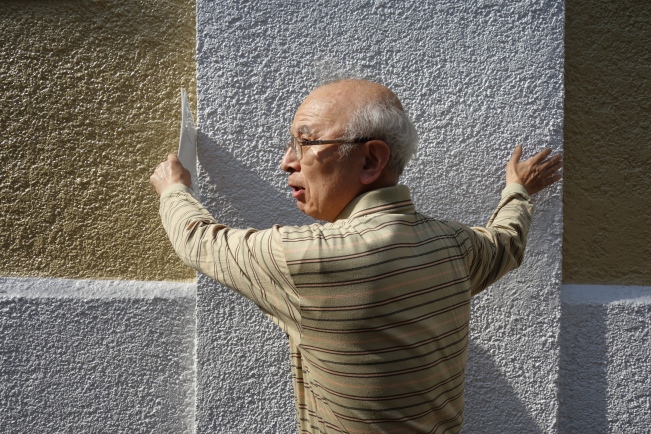 Honma has been happy to let Tasaki do the talking. He says later he had no idea how his landlord was going to perform this talk, as they didn’t rehearse. Now Honma stops at a corner and asks you to glance back down the narrow lane. The sun reflects off the alley and into your eyes, and through the leaves of subtropical pot plants it’s other-worldly. He says, This is my favourite view of a classic downtown neighbourhood street. Tasaki says you can’t make lanes like this anymore, as they are not wide enough for an ambulance to pass. He laughs. But even with the wider lanes, people make them narrow again, by putting out their plants.

There are very thin gaps between many buildings. Tasaki says, Do you know what they’re for? He pauses a moment before telling you. They were for night soil collectors, he says. You sold it for fertiliser. You recycled.

One resident who probably had a better life than a night soil collector was named TS. Tasaki points out his building made of mortar and covered in pebbles, and his initials inside a classically inspired wreath. Toyama Shiro, I believe, says Tasaki.

Tasaki describes them as being like Western-movie sets. It wasn’t hard to hide an illegal hut on the roof behind the facade.

A little further down there is a rare three-storey building. You weren’t allowed to build three storeys of timber, says Tasaki, but out of cement was all right. But people found ways around the rules. Many buildings such as the shopping-street nagaya had high, flat facades that extended above the second-storey roof line. The style of structure was called kanban kenchiku, signboard architecture. Tasaki describes them as being like Western-movie sets. It wasn’t hard to hide an illegal hut on the roof behind the facade.

Honma tells you about it as you arrive back at your starting point on Okazu Yokocho. Your group applauds the two guides, and a few of you go upstairs inside Honma’s nagaya shop, to his workspace and showroom, where he shows you some more old maps. He indicates the hidden storey above, where he lives, and says, It gets really hot up there in summer. When the sun comes out it heats up in five minutes. If you switch off the heater in winter it’s freezing in 15.

There are 13 nagaya in this row, each a mirror image of the other, with a staircase either side of the shared wall. Residents of the street included an ivory stethoscope maker, a midwife, and various craftsmen making decorative items. Back on the ground floor, Honma lifts the cover of a trapdoor – it’s a tiny bomb shelter dug during the war.

You head out into the afternoon sun, fade into the shopping street, unusually busy on this weekend, neighbours stopping to chat as they run into each other, walking the dog, buying more pot-plants…. Time froze for a few moments there.

2 Responses to Spirited Away