Mr Minagawa plugs in a guitar, lays it flat on his thighs, Hawaiian-style, and reels off some riffs. He picks up a ukulele. Strums it charmingly. I’m only pissing about, he says. All I really want to do is muck around. He waves his hand about his nicely smoke-yellowed shop. You know, I can listen to any tune and copy it.

He doesn’t take life too seriously. He shuts the store on dates with a 7 in them. Seventh, 17th, 27th. They’re lucky days to have off.

I have musician customers all over Japan, he says. Other music stores come to me for instruments. Even those big stores around Ochanomizu, they come to me. He gives you a sly grin.

Yes, it’s a bit hard to believe. In fact, Minagawa is not really a music store. The fluorescent sign outside says, “Loans.”

Ed Seidensticker wrote in his great history, Tokyo Rising, that 1930s Asakusa had more pawn shops than anywhere else in the city. Seven times more than Akasaka. It is traditionally an area for entertainers and outcasts. There are fewer pawn shops now, but the fringe dwellers endure.

A grim middle-aged couple in old exercise clothes come to reclaim their flat-screen TV. Mr Minagawa goes behind the counter. The couple wait wordlessly as he brings out the set from the kura — the thick-walled storehouse at the back. They pack it into a black oversize shoulder bag and leave.

Mr Minagawa says, I am interested in everything. I want to go to Australia. I want to play didgeridoo. Do you know the Chinese hyoutan-bue — gourd flute? It probably came from India, you know, it is what the snake charmers play. And then it was taken to Scotland and became the bagpipes. They sound the same, right? Hahaha. I have a real interest in this kind of thing. I am different from most people. I also like the Andean keina flute, do you know it?

Can he play it? What a silly question. He brings out his keina. A visitor gave it to me and I got CDs and listened and learned this tune, he says. He blows. See, it has no standard scale, it plays notes between the notes on our traditional scale. So you get some nice strange tones! Hahaha! 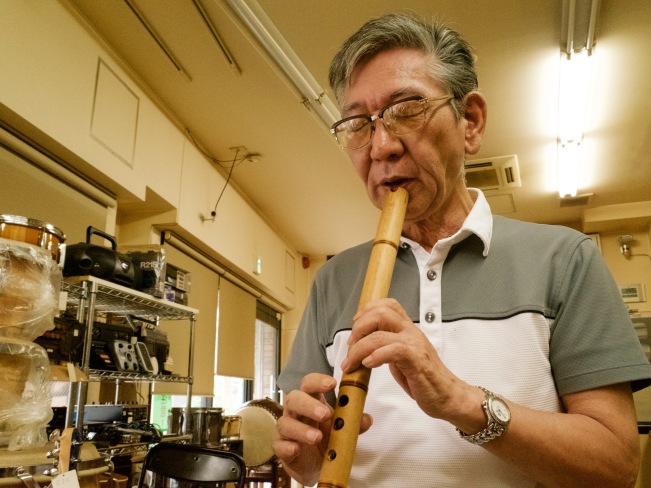 Mr Minagawa’s grandfather who came from Fukui prefecture established a general pawn store here 100 years ago. The kura storehouse he built in 1932 survived the US blanket firebombing. Young Minagawa switched the shop’s focus to musical instruments. Guitars dominate. There are more obscure Japanese copies of the famous Martin brand than you have ever seen.

I would sell traditional instruments like samisen, he says. But they never come in, and there are no players. No one has asked for a samisen for 30 or 40 years. It’s a pity isn’t it.

You say jokingly that when you fall on hard times, you will bring him your instruments. He shakes his head. Don’t start down that road! he warns. It’s bad for your health! He quotes a song by Okinawan band Nenes, which plays on the same word for money and a sort of flower: Don’t dirty your heart for gold; And gold flowers fall too. He is a pawnbroker who strives for harmony. 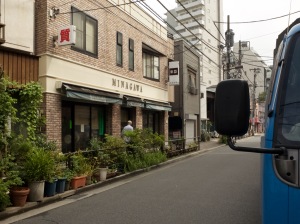