Tumbledown drinking house standing alone near the Yanaka graveyard, a woman tending a pot-plant in the doorway, light snow flurries, a brown and white cat sips water from a plastic basin. Pink peeling signboard, the lettering fading to the west up Kototoi-dori, a long way from Kototoi bridge and the Sumida River back at Asakusa. The single word, three characters, O-sen.

The name belongs here, though the woman won’t say it comes from that girl, O-sen. Teenage bombshell. Legendary beauty. In the 1760s she ran a tea-and-cake stall nearby at the now defunct Kasamori shrine. Dispensing sweet dumplings. As well as dumplings made of mud, for use as offerings in hard times. 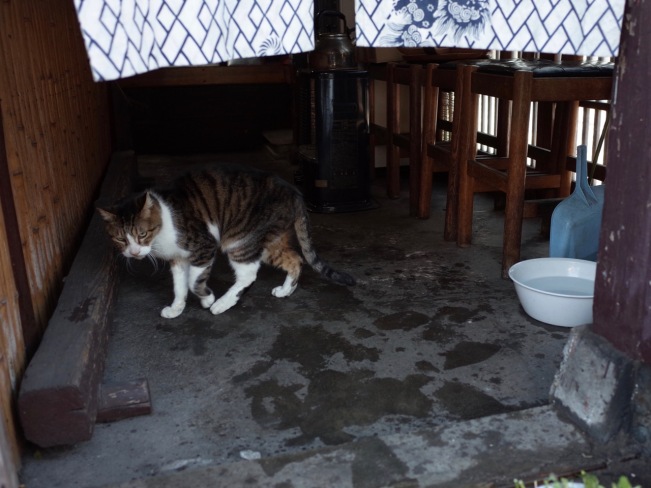 Her fame spread through woodblock prints. Men came from all over, some got more than refreshment. In one picture by Harunobu, a samurai enjoys a feel.

Jealousy came into it. If the customer couldn’t get O-sen, he could visit the grounds of Sensoji temple at Asakusa, the stall of O-sen’s rival, O-fuji. In one picture, you see O-fuji and a young cohort poring over a print of O-sen. In admiration? With scorn? Taking it apart, like cats?

Another print shows O-sen and O-fuji in front of the kneeling Ukiyonosuke, the incredible shrinking man of Edo. The girls have answered his prayer, providing magic potion that reduces him to the proportions of a bean, so he can act out his peeping-tom fantasies. Over 12-prints the tiny man enters people’s homes and private places. He watches unseen as a lecherous calligraphy teacher forces himself on his pupil, or in a field where a man in a mask has his way with a farmer’s daughter, and in a gay bordello where a fellow offers up his “chrysanthemum” to a customer.

Today the closest thing to Osen’s heavenly being may be this cat. He’s aged 90 in human years, says the woman. His name is Ikomatorazo and he is the boss, since the madame passed away six or seven years ago. The woman, who gives the impression she may have been a regular customer, says the madame was an extraordinary person “in every way”. But she says, If you asked if she was like O-sen, she would say, I’d rather not appear behind the counter, if you’re going to compare us.

It seems the drinking house is being kept as the madame left it. Or the woman is letting time return it to the earth. She says it is very cold. But it’s still in use. We practice traditional New Year kagura dance, performers of lion, flute and drum, she says. And I still open the bar sometimes. Neighbourhood gatherings. Complete strangers get together. You should come. Drop in if you see the lights on.

2 Responses to Pink Portal to Time