Old machines and old clothes pause here for a second chance, everything has value to somebody, even small, everything its aura, as if you’re stepping into people’s houses, seeing all their stuff, seeing these outdated products, like meeting a distant classmate, gee how time flies, warm flush of recognition then maybe a little embarrassment.

Relics. What kind of person collected these 80s CDs, and whoever thought this exercise device might help them? Hey who you looking at?

Comm-oddities and cast-offs behind the big yellow price-tags. Fads from the grave. There’s some good stuff too, here at Landmark recycle shop. The DVD deck marked “As new” also has “Not for Use in Japan” printed on the box, but Yutaka Hashimoto, age 68, says he tested it and it plays domestic movies all right, so may be good for any-region discs? You need one of those. 2880 yen.

He says, Bring it back if it doesn’t work. It turns out fine. The point-and-shoot Olympus still has film in it. How much? 500 yen. Of particular interest: Who shot it, and where did they point it? A friend, Andy, says, “Could be a picture of woman approaching with axe. This is the dead man’s ex-camera.” 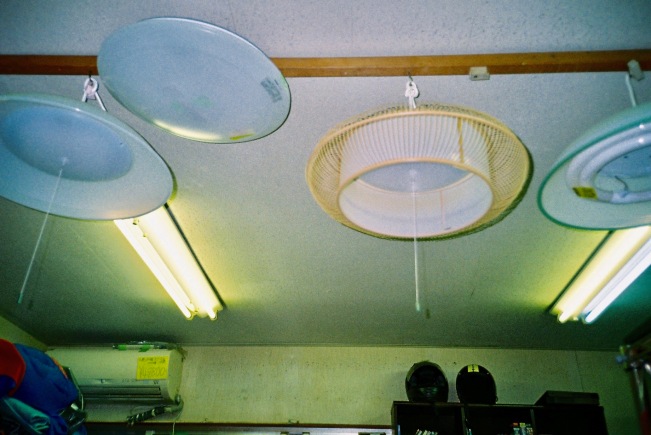 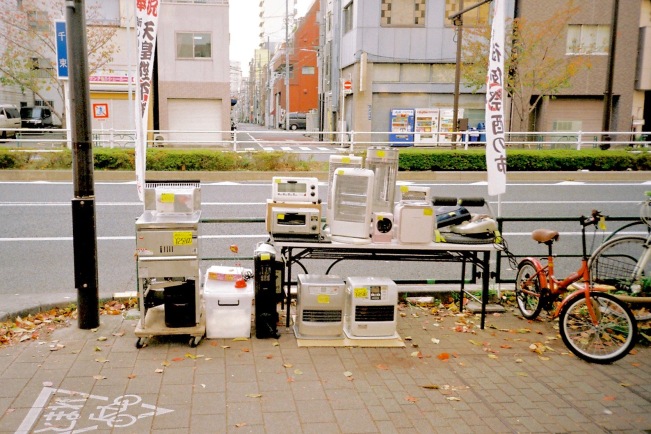 Mr Hashimoto is from across the river, a Mukojima lad, has been in the trade 20 years and ran a similar store over that way before moving here to Senzoku near the Otori shrine. Business has changed; blame online shopping and discount stores. Pretty tough now. But he gets by. No extravagant lifestyle. He thinks for a bit and says, “I guess my hobby is drinking.”

Washers and fridges, toaster ovens; you could assemble a household. And for luck, the fat red daruma doll, the last of 10 he bought last year.

Sliding door stays open through the winter day, the wide footpath is retail space, the cheerful appliances make the outside inside; decor of the street.