Across the river in Higashi Mukojima, formerly the red-light district of Tamanoi, where the crooked laneways wind around triangular and odd-shaped residential and light-industrial blocks to deposit you where you never expect, maybe back where you started,

there is near the Tobu railway underpass at Taisho-dori a butcher who sells among other things horsemeat and, in the alley behind there, a food store that dispenses bento and side-dishes, not much bigger than an average lounge-room, a ramshackle two-storey building adjoining a dirt lot with parked bicycles and other clutter, and here in the low-ceilinged kitchen, a man of few words in a checked shirt with short, wiry grey hair and rosy cheeks chops fish, vegetables and meat, deep fries, sautes and mixes, while at the counter stands his wife, a robust gregarious woman who grew up in Shibuya, dishing up cutlets, grilled fish, sashimi, chicken, potato salad, pork belly and so on for neighbourhood mothers, single men, teenagers, putting the food into crinkly clear plastic containers which she closes with a staple. 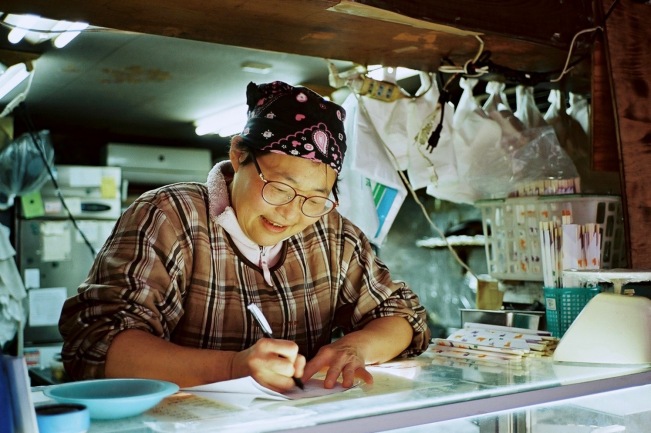 Naoko does not cook, as this is entirely the domain of her husband Eigorou, who despite his grey hair looks something like a boy, perhaps because of an undistracted focus that gives him an air of timelessness.

Naoko is at the counter.

That teriyaki chicken the other day was delicious.

Thank you, it’s because we cook it slowly in our own tare sauce.

How long have you had the sauce? I am thinking of the yakitori places that top up their secret-recipe condiments for years, though it’s unclear she heard the question as intended, as she says,

Now you mention it, 25 years. It must be destiny you ask that, because it’s exactly 25 years ago today we opened here.

That would have been 1995. She began dating Eigorou after getting to know him as a customer at a restaurant in Kyobashi where he cooked, one of many kitchens where he worked including French, Chinese, ramen, all sorts, having started as an itamae chef in Tsukiji after coming down from Niigata.

He had a dream to run his own store and as the bubble economy had collapsed they worked hard to save money, and they found this building and the neighbourhood felt right and they called the shop Sakanaya-eigorou, Fish Store Eigorou, the name containing the character for “8” because an expert said it would be fortuitous, and they even added a small reservation-only dining space in the tatami room upstairs and she never let any setback derail her, and this is very obvious — because on the narrow profit margins from selling side dishes in Tokyo they have raised a family of seven children: six girls and a boy.

All made possible by the two skilled hands of Eigorou.

No minor achievement and she has even been on TV about it and written her autobiography, a spare copy of which she fetches from home after dashing around the corner, titled Bringing Up Seven, with the catch-copy, “plenty of heartache, seven times the joy.”

As we are talking Eigorou, who has been out, returns to the kitchen with some ingredients and she tells him,

This fellow is interviewing me.

Eigorou says, Is that so, well hello, and dips his head politely and gets to work.

He hardly needs to talk because he already has his purpose, has worked at it for years, and the next time I encounter him and buy some grilled salmon it is as though we hadn’t met and so I make no small talk, only pay and take home the fish and some other morsels though it may be that I walk more lightly, uplifted by this reassurance of certainty in the world.